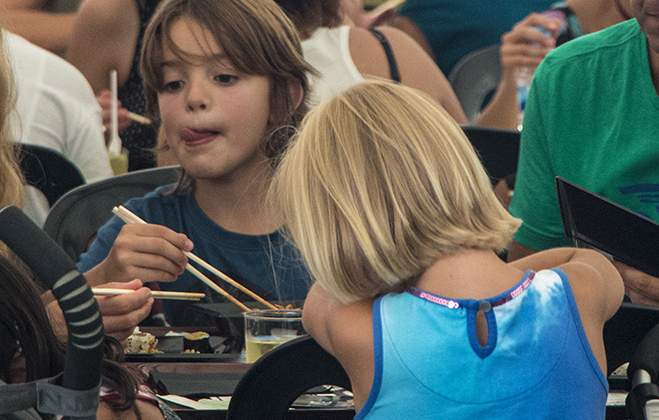 Nights at La Bassa are the epicentre of the Summer Asian Film Festival that started 13 years ago with a combination of film and Asian food. This year it will take us on a culinary trip to India and Japan, with stopovers in China, Nepal and Hong Kong. A journey through textures, flavours, spices and colours that will make our mouth water.

While enjoying these delights, several shows and exhibitions will take place at the outdoors stage Escenari Obert de la Bassa. On Tuesday 12th of July, the J-Rock band White Noise will play live and will officially launch their second album on the opening night of the festival.

Dinners have fair prices and are great value for money. They cost 10 Euros, except for the opening night dinner that will cost 12. Booking is not required. Food will be served from 20 h and tickets will be sold from one hour before at La Bassa dels Hermanos. People attending the 19 h screening at Cinema Vigatà will also be able to buy it from the box office of the cinema.

If it rains, dinners and screenings are guaranteed because the festival will set up a marquee to provide shelter in case of rain. It was new from last year but not a single raindrop fell. This year it will be set up again, but let’s hope for great weather.

During the Nepalese dinner, money will be raised with voluntary donations to help those affected by the earthquake occurred in Nepal in 2015.

For the bravest ones that come to the Late Night screening on Saturday at Cinema Vigatà, the festival will serve late-night dinner provided by some of our sponsors.

If you are getting hungry, check out the menus and prices.

Share
« Literary Nights
Music and Much more on Stage »